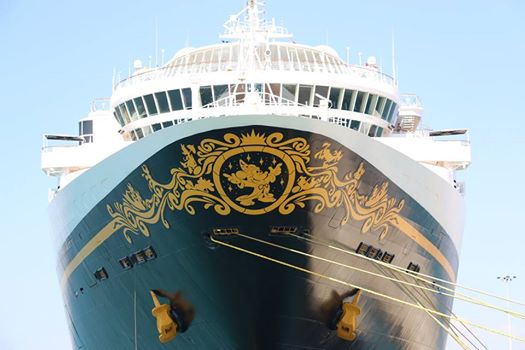 For years and years I dreamed about exploring the historic sites of Europe. As an art history minor in university, I had written countless essays on architectural and artistic genres, I had identified slide upon slide of famous sculptures and paintings, and I knew I could navigate my way through these incredible places from all the readings I had done.

Europe had to wait, however, our son was unable to make the lengthy overseas trip, let alone be expected to stand around the countless museums and fully appreciate what he was looking at. What he could do, to his immense pleasure, was to visit Walt Disney World Resort, Disneyland Resort and sail with Disney Cruise Line.

We’ve sailed ten cruises on all four ships in the fleet, with the great majority of those sailings including itineraries of seven days or longer. These cruises laid the groundwork for my son and helped him acclimate to vacationing because there were many rewards all around him. It was on these cruises that we saw huge developmental improvements, there was motivation everywhere. I could use my ‘first and then’ routine and get him to do just about anything. After all, who wouldn’t want to finish their dinner to go and greet Mickey Mouse, or play in the full scale version of Andy’s Room from the hit movie ‘Toy Story’, after many attempts at minor social behaviour training sessions while sailing. Reinforcement was instant and anything we attempted to teach our son was a hit.

Without fully realizing it, vacationing with Disney Cruise Line and the Disney Parks had laid the foundations for expanding our horizons beyond and had prepared us to embark on new adventures.

We decided to sail with Disney, on our first ever, family trip to the Mediterranean, with stops at our ancestral homeland of Greece. We were beyond excited! We selected the nine day Disney Cruise Line itinerary aboard the re-imagined Disney Magic, in our regular mid-ship verandah stateroom. Sailing the Mediterranean with Disney Cruise Line meant peace of mind and stellar standards. We would know exactly what to expect each and every day. We would be sleeping in the same bed every night which would afford my son consistency and no transitioning issues, which can make or break a vacation. So, I began to plan the port adventures in the Mediterranean with ease right through Disney Cruise Line’s online Planning Center. I selected a port adventure at every single port and all were almost day long excursions with outstanding and well planned itineraries.

Our adventure began in Venice, Italy where we decided to spend a few days before the cruise in order to visit various historical places. I booked a private tour company for these days and although the tours were extensive and detailed, they were exhausting, demanding and proper breaks were not included, you kept going all day long. I tried my best to keep up with the groups all the while attempting to keep my son comfortable, well-behaved and happy. That was difficult for me.

I secretly couldn’t wait to board the Disney Magic and was excited when our Saturday came along and we boarded our motor coach for the ride to the port. The port, owned of course by the port of Venice didn’t look anything like the one in Port Canaveral, but Disney Cruise Line made many successful attempts to make it look and feel like the one in Port Canaveral, with colourful Captain Mickey banners, booths and cast members wearing the familiar outfits and big, white Mickey Mouse hands waving away. Boarding process and screening was similar, but we had to walk outside, alongside the ship towards a make-shift building with huge elevators and a stairwell in order to reach deck three and board the ship. 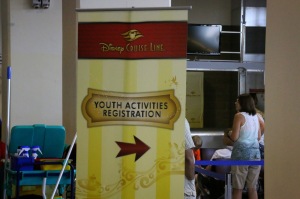 Once inside, it was as if a huge burden was lifted off my shoulders because we were home and all would be well. My son even lead the way to our stateroom and helped me decorate our stateroom door. Things were back to normal now, we were on the Disney Magic. 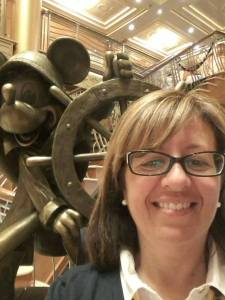 Right away normalcy dominated because we knew the ship well, and knew what to expect at every turn. It truly was just like being at home, with a whole lot of fun everywhere you looked.

The first port of Katakolon, Greece, took us to ancient Olympia and here, my son had the unique opportunity to stand on the actual marble starting point in preparation for his sprint through the length of the stadium. In Pireus, we were taken to the Panathenaic Stadium, Athens Acropolis, Plaka and the Athens Museum. We visited Kusadasi, Turkey and went through an extensive tour of the last known House of the Virgin Mary, saw the magnificent ruins of Ephesus, followed by an outstanding lunch at a replicated version of ancient Ephesus. The Lindos Acropolis fascinated my son and we tried to get him on a donkey but he felt too shy. Old Town Rhodes was breathtaking and we always caught a brief glance of the beautiful Disney Magic, which dominated the sea and land. The windmills in Mykonos captivated my son because they were enormous and he’d never seen anything like that before. Upon our return for two glorious days in Venice, in the luxury of the Disney Magic, there was nothing better than looking out of your verandah and seeing St. Mark’s Square a stone’s throw away. Andrew at that point said, “Epcot.” Imagine that! He made the connection and I was so grateful.

Photos below at Olympia’s Stadium marble starting line and the Disney Magic docked at Katakolon, the port nearest Olympia.

My children enjoying the views atop the Athens Acropolis.

Below, a most captivating day at Ephesus.

Siblings getting along in Rhodes.

Andrew winding his way through Mykonos.

Andrew and my mom.

Andrew made many connections to the Italy Pavilion at Epcot’s World Showcase at St. Mark’s Square in Venice.

Here is what I was most grateful for. On every port adventure, every guide made Andrew feel valued and important because he was given the opportunity to have a purpose. Andrew was presented with the task of leading each of our tour groups and I cannot express how that made him or us feel. What I do know is that I saw his confidence soar, right before my very eyes. I saw a joy in my son’s eyes and a happiness I had never seen before, all because the tour guides afforded him a completely inclusive experience. All this because of Disney Cruise Line port adventures. 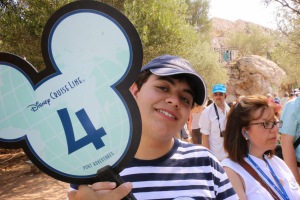 Watching my son leading the tour group by holding the Mickey Mouse tour group sign was one of the most gratifying moments of my life. Andrew has come such a long way and the majority of his developmental improvements have happened during our Disney parks vacations and sailing with Disney Cruise Line.

After having sailed eight Disney cruises on all four ships in the fleet, we felt ready to head over and explore Europe with the peace of mind and comfort offered by the cruise line. Always keeping my Autistic son in mind and the consistency that he needs, it was only Disney Cruise Line for us. Andrew knows all the ships and can take you from bow to aft in a flash, with great ease and certainty, while stopping for some soft serve ice-cream along the way. The staterooms are consistent in appearance and layout on all the ships, the decor comfortingly similar with unique flourishes and dining rooms all familiar and captivating. These are the considerations that keep us sailing with Disney Cruise Line. If Andrew is at peace, then we relax and focus on memory making. Disney Cruise Line creates a safe and secure environment which fosters growth for our son. Both my children have grown up sailing with Disney Cruise Line and celebrated eight of their actual birthdays onboard.

My daughter celebrating her birthday sailing the Disney Fantasy.

I booked a port adventure at every Mediterranean port and was very excited and comforted by the high standard offered by Disney Cruise Line and great peace of mind. Booking port adventures through them was inexpensive and I knew that if anything went wrong, Disney would be there to assist. They partner with only the best tour companies who fit Disney’s high standards.

Andrew at the starting line at Olympia.

While I won’t elaborate on every port, I will say that every guide was highly trained, paced the tour perfectly and every guide included my son above and beyond the norm. They made Andrew feel a part of the group, they made him feel valued and important. He was given small tasks which fostered inclusion and made Andrew very happy. Andrew held the Mickey Mouse port adventure signs many times leading the group and kept it together, even in the Athens Museum (where I was worried about him making loud vocalizations). Andrew was great, he was immersed in our world, his behaviour was appropriate and just before boarding the bus, having reached his limitations, he asked the tour guide to take the sign back, saying, “I’m tired, no more sign.” We felt so gratified to see our son so happy and we could see his confidence growing on the spot.

Here is Andrew feeling pride at having led the group closer to the Athens Acropolis.

I never once had any behavioural issues on this trip where the port adventures involved a lot of walking in the hot sun, because of the immersive allowances, the pacing of the tour and the stops at the most amazing, high end restaurants, taverns and cafes for meals and refreshments.